If you’re visiting Maine you need to make sure that you have at least one lobster meal. Below are the best places to eat lobster in Maine.

The Eventide Oyster Company is a Portland-based restaurant chain that has upgraded the American concept of an oyster bar. Instead of the usual drab and often uninspiring interiors, Eventide branches are brightly lit and have a signature blue wall. And the improvements do affect the way diners enjoy their meal. Another common feature of the restaurant is the granite slab that is covered in ice and oysters. But oysters are not the only thing worth ordering in this restaurant. Their brown butter lobster roll served on a Chinese-style steamed bun is definitely a must-try. To ensure the freshness of their food, the restaurant sources its shellfish and lobsters from local harbors.

If it’s a complete Maine lobster experience you’re after then the place to go is Five Islands Lobster Company. You’ll know this is a popular place because of the constant stream of fresh lobsters that enter its door all throughout the day. The lobster they serve here is the deep-water variety and they are boiled to perfection. Popular items in the menu include the lobster rolls with only the freshest lobster meat, the haddock chowder, which they make daily, and the deep-fried seafood, which is a bestseller. And to the top it off, the restaurant also gives you a great view of Sheepscot Bay.

If it’s Japanese food you’re after then you should head to Miyake. The restaurant is named after owner and head chef Masa Miyake who combines French and Italian influences to create unique and innovative Japanese food. You can choose to eat à la carte or order their set menu, which changes every night. Chef Miyake uses only the freshest ingredients, with locally-sourced meat and seafood and produce coming from the chef’s own farm. A must-try is the restaurant’s Japanese version of the lobster roll that has truffle oil, spicy mayo, tobiko, and black sesame soy paper as the wrapper.

Red’s Eats is probably the most famous lobster place in Maine. Almost everyone in the area is familiar with the red and white striped shack that has become synonymous with lobster itself. And the place is not only popular among locals. Tourists routinely include Red’s Eats in their travel itinerary. It has a wonderful location too, being on the scenic Sheepscot River in Wiscassett. There’s a disadvantage though for being a popular joint and that is overcrowding. If you’re planning to have lunch here you expect to line up for several minutes before you can have a table. And when you do get a table be sure to order the classic lobster roll.

If you’re on a budget, you can still enjoy a lobster meal if you’ll go to Robinson’s Wharf & Tugs Pub. It is known in all of Maine as the cheapest place to get a twin lobster meal not only in the city but in the entire USA.

Tina is a chef and runs her restaurant with her sister in Maine. They currently live in the house that used to be owned by their grandparents.

Tina is a chef and runs her restaurant with her sister in Maine. They currently live in the house that used to be owned by their grandparents. View all posts by Tina Johnson 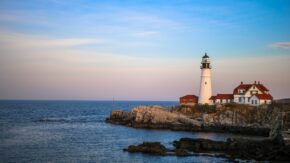